Brighouse: A Town Through Time

Welcome to our online exhibition exploring change in the town of Brighouse over the last century through local art and artists.

The full exhibition is currently on display at Smith Art Gallery in Brighouse. Check back for updates on when we are able to re-open. We will leave this exhibition in for longer than previously advertised to allow visitors time to see it.

CLICK HERE FOR SOME FAMILY ACTIVITIES INSPIRED BY OUR ‘TOWN THROUGH TIME’ EXHIBITION.

Calderdale Museum Service has artworks in its collections showing scenes of Brighouse dating from the mid-nineteenth century. These include works by local artists such as Stanley Chapman, Miles Sharp and his son Miles Sharp Junior, showing the growth and decline of industry in Brighouse over two centuries. To showcase changes in the town up to the present day, members of the Halifax Photographic Society have recreated the views of Brighouse in the paintings.

The area of Brighouse is steeped in history spanning the last thousand years. After the Norman Conquest, this area was part of the wider Manor of Wakefield. In 1270 the first wooden bridge was built to allow crossing of the River Calder, the only way to cross the river before this point was stepping stones. The Manor Court was held in the town twice a year so anyone in the surrounding area accused of an offence had to travel here to face trial. It was during this century that the area began being recorded by the name of Brighouse.

By 1753 there were still only 55 houses in Brighouse centre, with many local people working in the textile industry from their own homes in the surrounding countryside. Over the course of the next century Brighouse would grow into a much larger industrial town with the development of the textile, mining, quarrying, wire working and dye industries.

In 1974, the borough of Brighouse became part of Calderdale. In April 2019, the Brighouse Business Improvement District was formed to steer redevelopment of the town, develop improvements for the area, continue a wide variety of events and promotions and make Brighouse a destination town.

This etching 'A Yorkshire Waterway' by Miles Sharp Junior (1897 – 1973) shows how the grain was unloaded from Sugden’s flour mill into boats on the canal, and although it is undated, photographs of similar scenes indicate this may have been completed in the late 1930s. The Calder and Hebble Navigation is a canal that runs for 21.5 miles between Sowerby Bridge and Wakefield. Construction began in 1759 and by 1764 the canal was open as far as Brighouse, connecting the mills of the town with Dewsbury and Wakefield, and later with Halifax, Rochdale and Manchester. 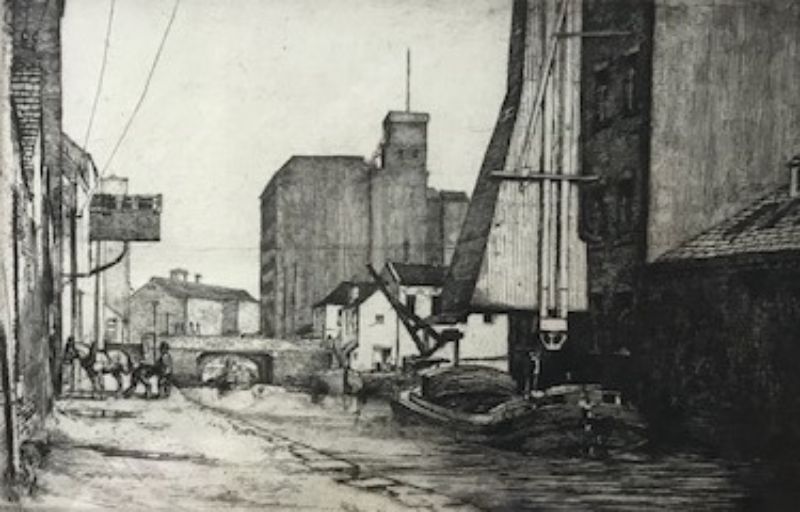 This view was recreated by Elaine Caffrey of the Halifax Photographic Society and shows that whilst the canal remains unchanged, the buildings along its sides have changed significantly.

The canal itself is no longer primarily used for industrial transportation, but by walkers, cyclists and cruisers. 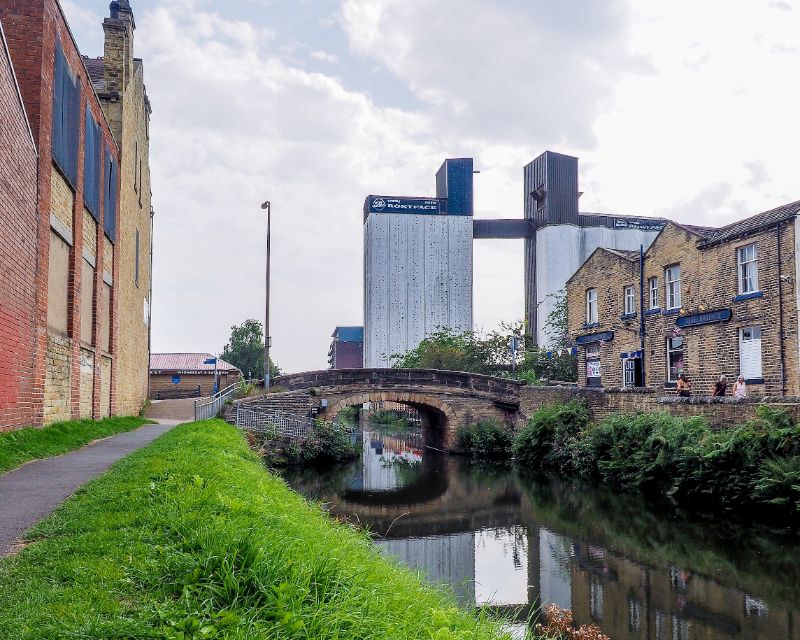 There has been a record of a wooden bridge on this site since 1270, and in 1514 a John Hanson paid for timber to be used for repairs of the bridge. In 1558, Hanson’s son paid for the construction of a stone bridge on the same site. 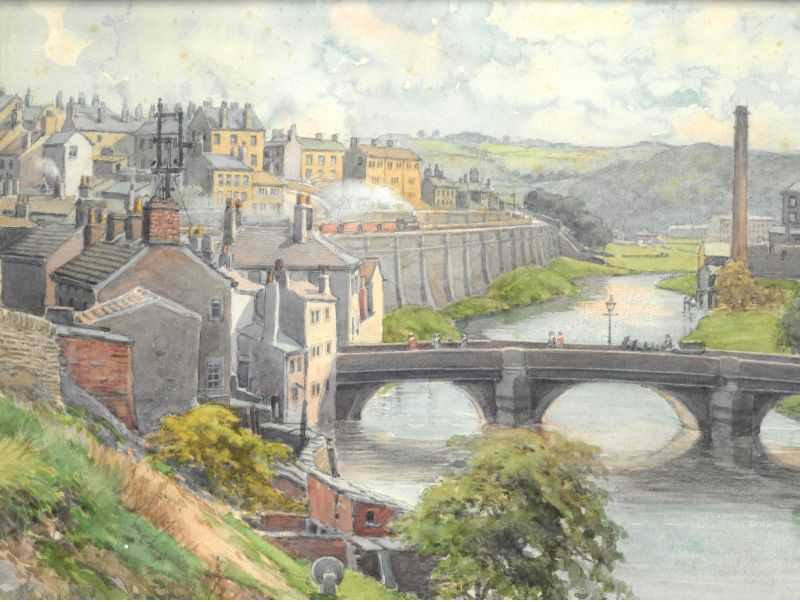 This view has been recreated by Keith Norman. The bridge was rebuilt around 1750 and remains an important crossing point of the River Calder.

A house that stood near this bridge called Bridge House gave Brighouse its name.

It is no longer possible to access the precise spot from which Sharp painted this scene, however, this photograph shows how little the structure of the bridge has changed over the last century. 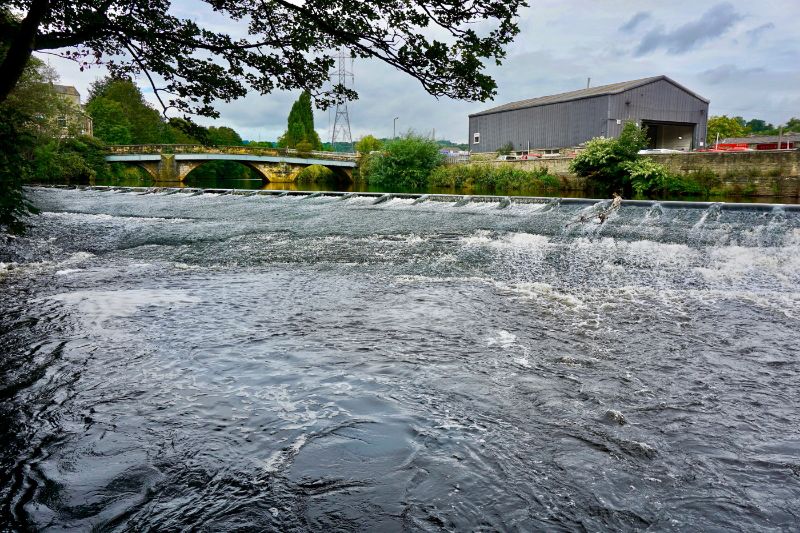 'Dawn Over Brighouse From Brookfoot'

This watercolour was painted by Stanley Chapman (1913 – 1989). Chapman worked at J. C. Bottomly and Emerson Ltd., a paint varnish and dye manufacturer based at Brookfoot, and so would have spent a lot of time in the area.

This view from Brookfoot towards Brighouse captures the distinctive silos of Sugden’s flour mill standing out from the town. The industrial landscape is something that inspired Chapman throughout his creative career. 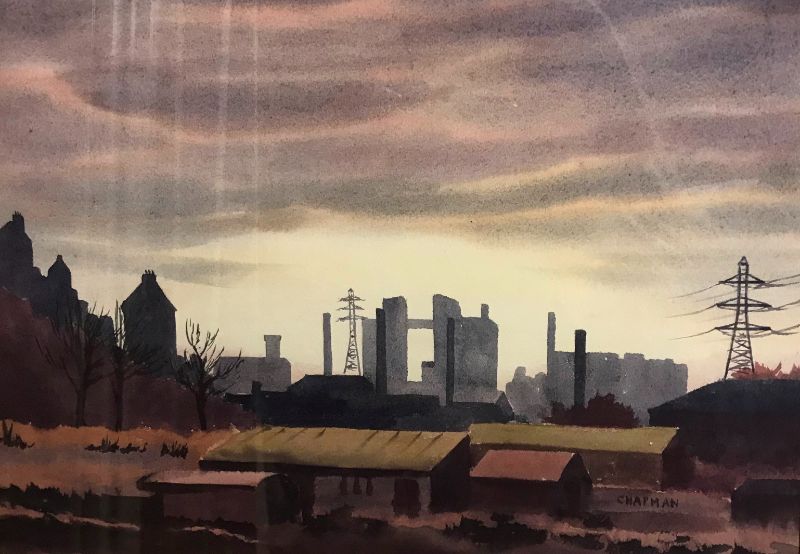 This photograph was taken by Tony Sheeky and shows how much more tree cover there is in between Brighouse and Brookfoot today compared to the time of Chapman’s painting. 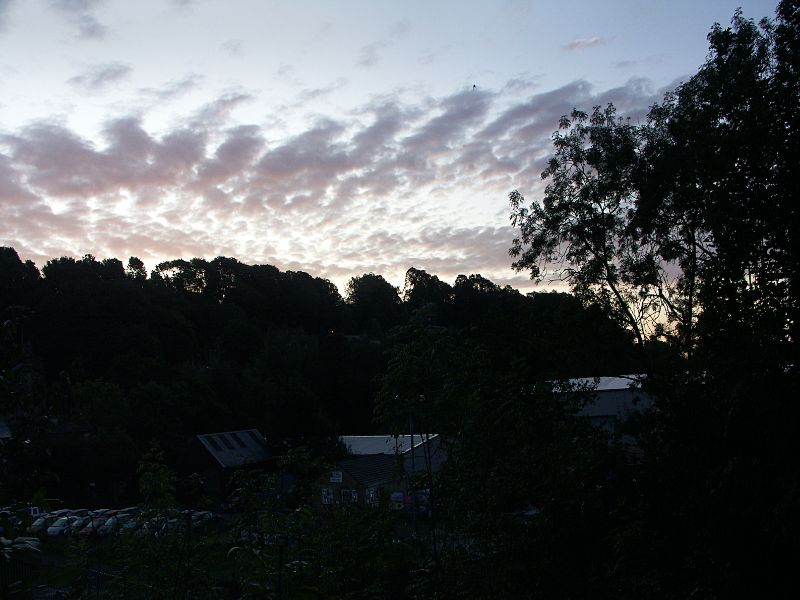 This view of Brighouse from Healey Wood was painted by Fred Cecil Jones (1891-1956) in 1935. Born in Bradford, Jones was a painter, etcher and teacher who served in the First World War as a reconnaissance painter, where he earned the nickname ‘Detail Jones’. 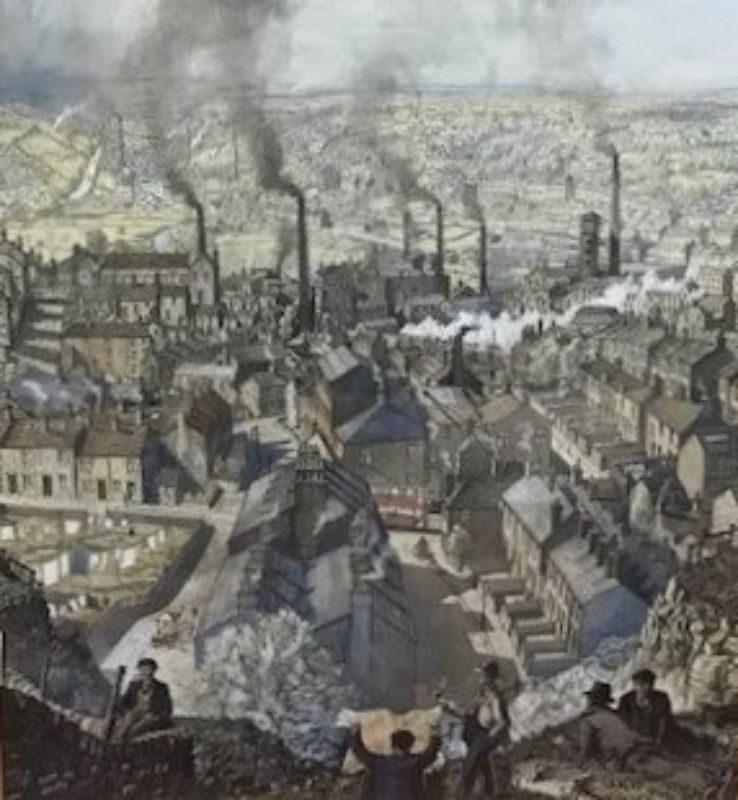 The painting has been recreated by Helen Heymen, whose photograph shows the same skyline of terraced house rooftops, but now without the smoke of the mills pouring out over the town from the now-demolished chimneys. 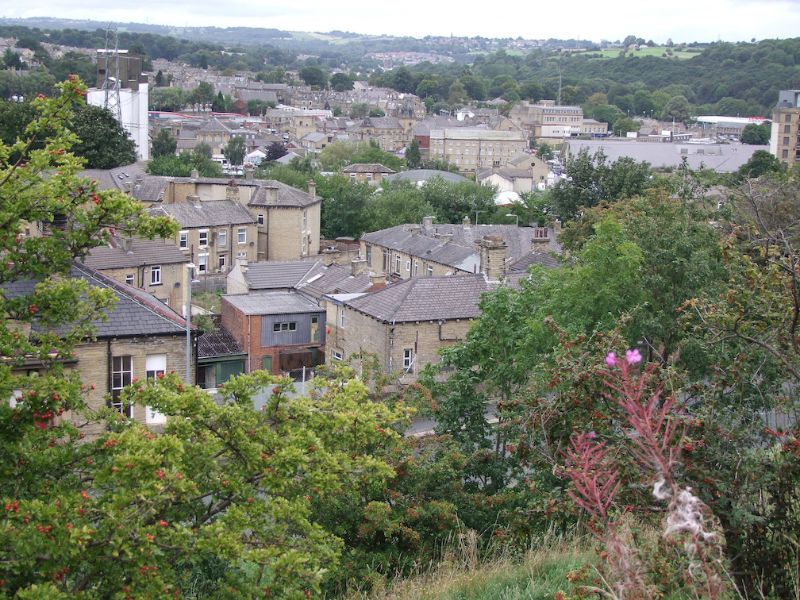 In 1902, Brighouse Town Council borrowed £40,000 to construct new sewers, conduct street improvements and establish a new public market. From 1910, this was held on Market Street, the site that Sharp painted in 1923. 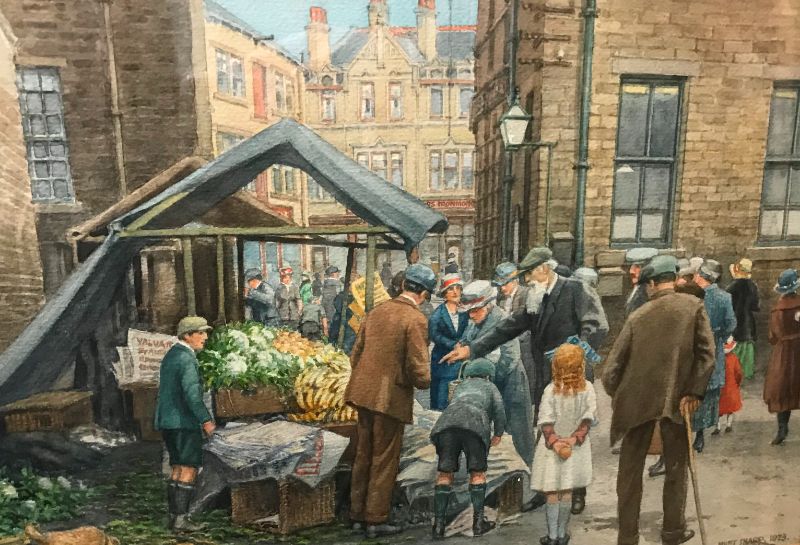 This view was recreated by Tony Sheeky of Halifax Photographic Society.

In 1951, the market moved once again to Back Bonegate, until the area was demolished in the 1970s. Brighouse Market now takes place in a purpose-built site on Ship Street and is open on Wednesdays and Saturdays. 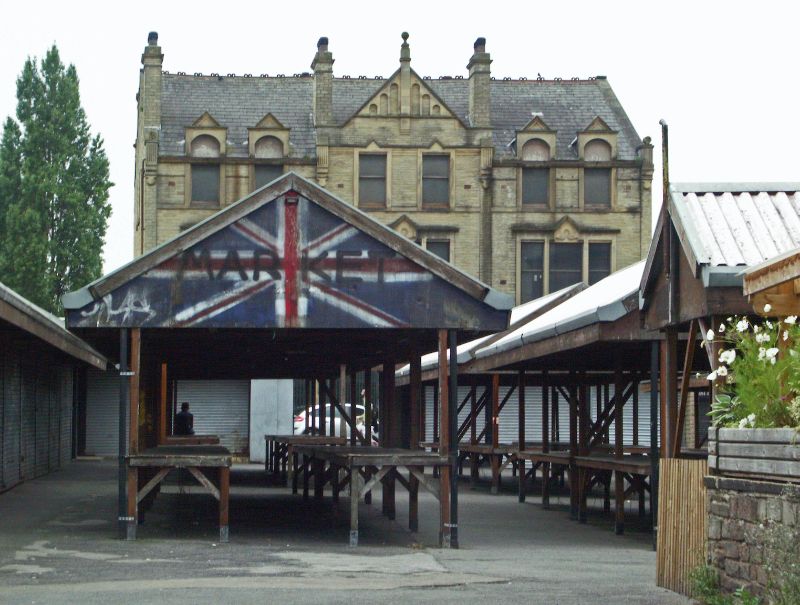 Thomas Sugden & Son’s was a flour milling company founded in 1829 in Perseverance Mill on the Calder and Hebble Navigation. Due to expansion, the company moved to Brighouse Mills, and later had to rebuild the mills after a fire destroyed them in 1895. This pen and ink view of the mills was by Stanley Chapman (1913 – 1989) in 1960.

The huge white silos are a landmark in the town, and are a distinctive part of the Brighouse landscape. The first was built in 1959 and the second in 1963. 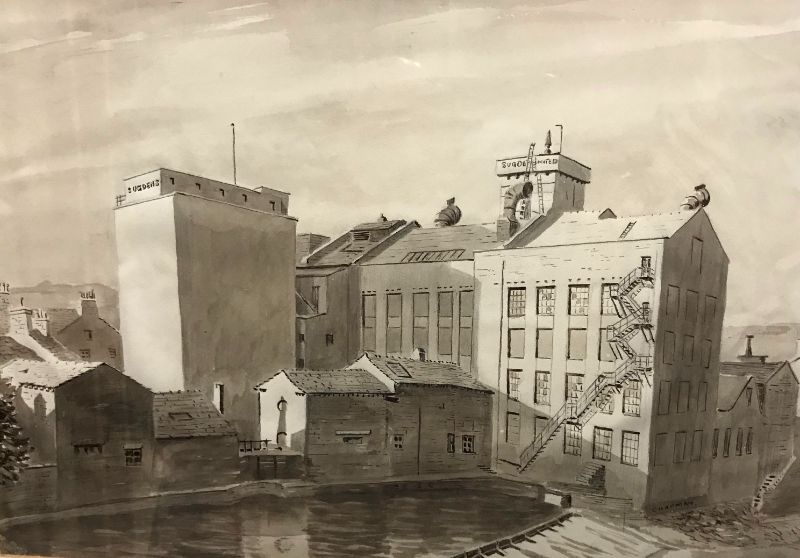 This view has been recreated by David Williams.

The company closed in 1997 and many proposals for the use of the building were put forward.

In 2011, the ROKT climbing centre opened and brought new life to Sugden’s mill, repurposing the huge silos into a indoor rock climbing venue. 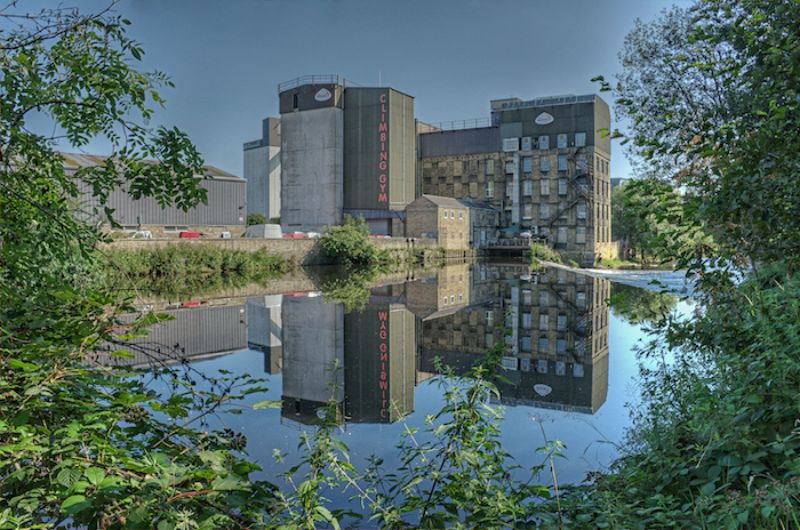 The Rydings park contains this purpose-built art gallery and public library, known as Smith Art Gallery and Brighouse Library, which was donated, along with a significant collection of art works, by Alderman William Smith to the people of Brighouse in 1907.

Chapman’s view of The Rydings has been recreated by Iain Dickinson, whose photograph shows how little the building and its surrounding green space have been altered over the century.

Smith Art Gallery continues to exhibit some of the large collection of paintings, drawings and photographs of Calderdale Museum Service’s collection. 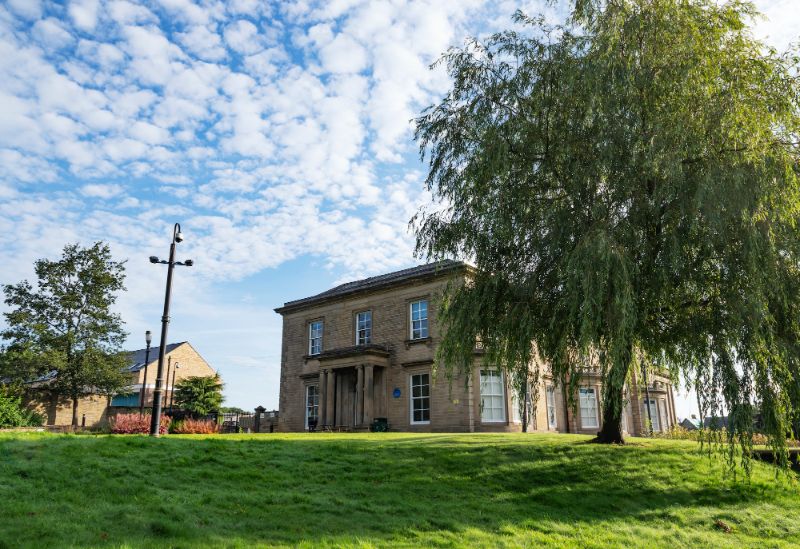 When Miles Sharp (1864 – 1948) painted this watercolour view of Back Bonegate in 1913, he captured a typical terraced street. This one led off Bradford Road and was home to a fish and chip shop.

An architect by trade, Sharp enjoyed painting the alleys, snickets and streets of his hometown of Brighouse. He captured many scenes of the local area, and often painted himself into the pictures as a tall man with a walking stick, as you can see in the bottom left of this picture. 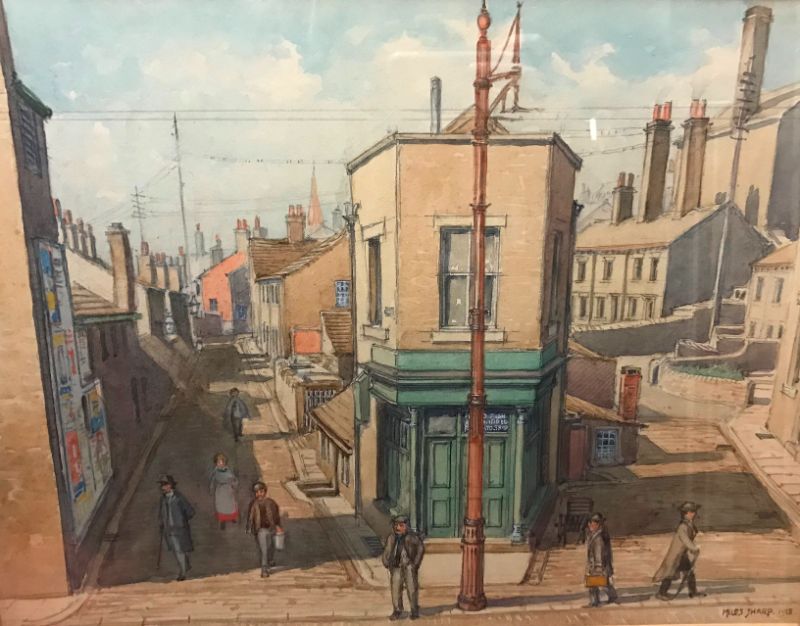 This view was recreated by Tony Sheeky from where Back Bonegate used to be.

Today Back Bonegate no longer exists as the houses were demolished to allow for the construction of the Lüdenscheid Link bypass that opened in 1972.

This etching by Miles Sharp Junior (1897 – 1973) is taken from the viewpoint opposite that of his father’s painting, also named Bridge End, Brighouse, (shown above) and shows a very different aspect of the town.

Sharp Junior’s etchings focus on the large number of mills making up the industrial heart of Brighouse from the nineteenth century until the mid-twentieth century. 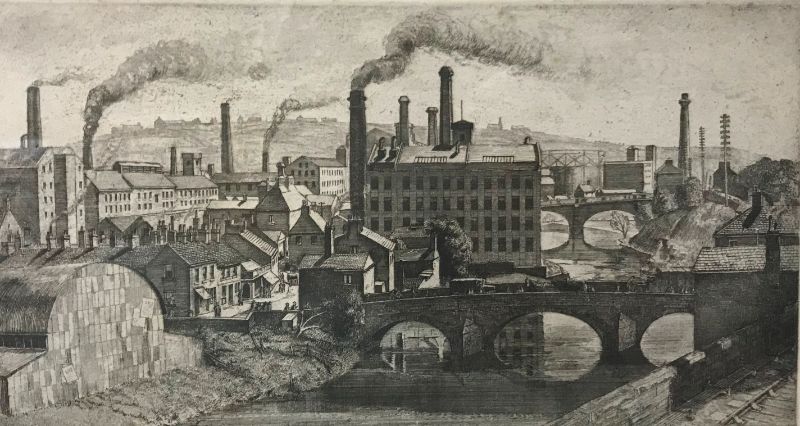 The new photograph, taken by Keith Norman, shows the decline of industry in the town, and one of the ways the old mill buildings have been repurposed.

The large mill in the centre was originally built in the nineteenth century by Thomas Sugden as a flour mill that operated until 1997. The mill was reopened as the ROKT climbing centre in 2011. 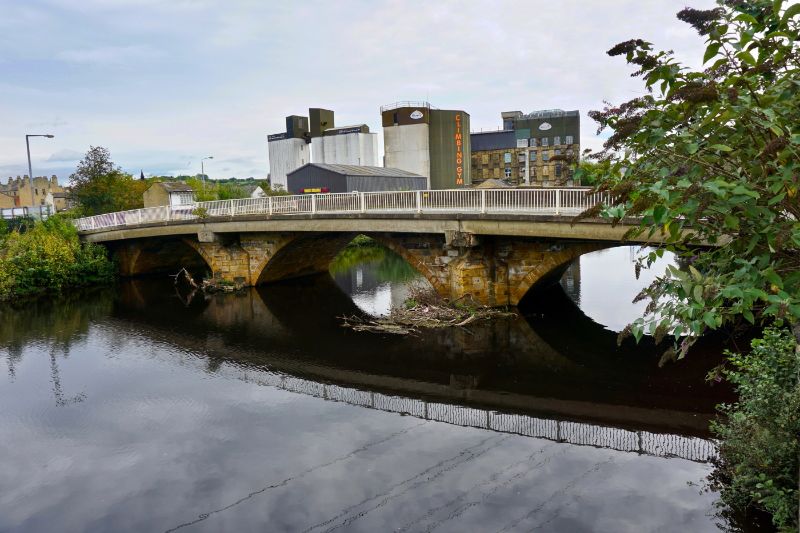 This pen and ink painting is by Albert Pile (1882-1981) c. 1950. As a London-born civil servant in the 1930s, Albert Pile became fascinated with documenting the disappearing buildings of Whitehall as the area was redeveloped. Pile retired to his wife’s hometown of Brighouse, where he continued to document the buildings around him. A series of his sketches, including this view of St Martin’s Church, were used to illustrate R. Mitchell’s Brighouse: Portrait of a Town (1953). 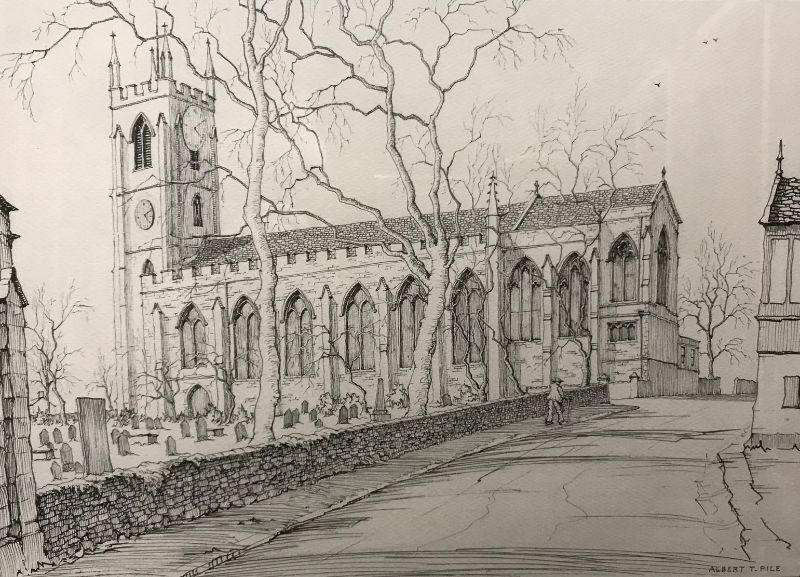 Brighouse Parish church was consecrated in 1831 after being funded by an 1818 Act of Parliament providing grants for churches to be built in developing industrial areas.

From 2002 to 2006 the church underwent refurbishment in time to celebrate 175 years of consecration and is still open today as a place of worship, community activity, concerts and exhibitions.

This view has been recreated by Tony Sheeky. 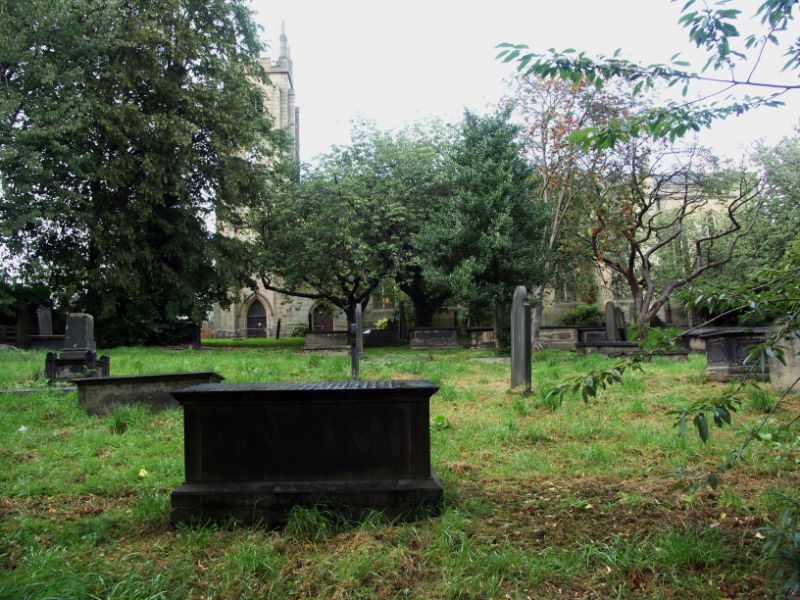 The full 'A Town Through Time' exhibition opened on 19th October 2019 and features 26 paintings and drawings by local artists of Brighouse over the last two centuries. We would like to thank the Halifax Photographic Society for their help in recreating historic views of Brighouse to accompany the originals to show change in the town over time. We are looking forward to reopening Smith Art Gallery as soon as possible so that visitors can come and view the full 'A Time Through Time' exhibition.